A towing boom is something that fits to the leading edge end of the cover and allows you to pull the cover onto the pool easily and without water spilling onto the top of it. My floating ‘bubble’ pool cover didn’t come with a tow boom so instead of paying over €100 for a commercial kit one I made my own for about €20!

The floating cover on my swimming pool saves wasting thousands of litres of water through evaporation but it was difficult to put the cover on the pool quickly. It is easy to become complacent and not bother covering the pool following an early morning swim.

How I made it

This was a DIY project full of improvisation which I kind of made up as I went along – just as any competent DIY tinkerer does! It is certainly not a precise construction guide.

Although I have referred to my cover as a solar cover it is not actually the kind that raises the temperature the water to prolong the swimming season. My cover is a heat reflective cover. In Cyprus during the peak summer season you really don’t want the water being heated up. If you take the cover off you lose the benefit of reducing evaporation. So I found a company based in the UK called Plastipack Ltd.  who make a cover designed to reflect the suns rays called CoolGuard so it doesn’t have the effect of heating up the water. It does still have the effect of retaining the ambient temperature of the pool so the water doesn’t cool down much at night. This is good before and after the peak season here but during the hotter months I sometimes leave the cover off at night to let the water cool down a bit.

The video above was made in 2009 and the cover has weathered a bit since then as can be seen in this photo. The cover still functions perfectly though and the Twiglet the cat likes it too. 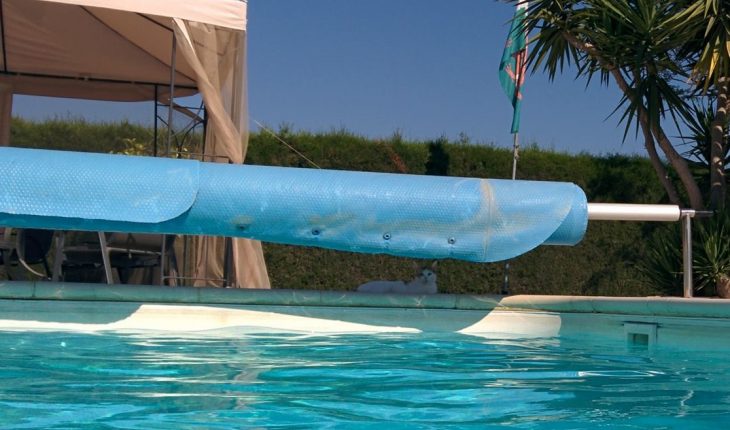 After almost 8 years of service it’s time to order another Plastipack (or Geobubble as they call themselves now) CoolGuard cover. In the last year I think many of the bubbles have become perforated and as a result have taken on water. It still floats OK, reflects the heat and eliminates evaporation but when wound onto the roller it is really heavy and difficult to move. The manufacturer says the cover has a life span of only 6 years – I have to disagree, and I don’t exactly look after it!! I never cover it when it is on the roller and in the winter I just leave it with no chemicals in the pool and let the weather, dirt & grime do it’s worst, only scrubbing it down in the spring. Cyprus summers are harsh to anything left out in the sun, our pool gets no shade and Summer temperatures (in the shade) can be in the 30’s from May through to September/October peaking close to 40 degrees in August.

It is possible that the perforations are a result of general misuse – when I clean it I just lay it on the stone patio and zap it with a high pressure jet washer while walking all over it – not the best way to treat it! I reckon if I’d taken a bit more care of it it wouldn’t need replacing for another few years. It is also possible that the repeated high speed excursions by cats across the cover may also have had something to do with the recent demise of some of the bubbles!

UPDATE!!! August 2017: My new CoolGuard cover with ‘GeoBubble’ technology has arrived in Cyprus – I’m just waiting to get a proper tow kit shipped here (I decided to ‘splash out’ this time) before I install it do my follow up blog and video – details to follow!

Thanks to the guys over at www.weather-beater.com for liking my blog post – if you’re in USA/North America and want to get yourself one of these covers they can help you.

It is not a Safety Cover

Floating ‘bubble’ pool covers are not safety covers. They cannot support the weight of a human or large animal such as a dog (cats seem OK though). If your pool requires safety provision, for example because there are children around, then a child proof fence is a great solution. Check out my friends over at Safe-T-First Pool Safety who sell those and other pool safety solutions – Lloyd, the owner of the business, has also put loads of great info on their website about pool safety.

If you have any questions or comments, feel free to post them below.