How to launch apps on Fire TV with Harmony Remote

If you’ve got an Amazon Fire TV box and a hub based Harmony remote control, this is great news!

Harmony remotes are all about setting up activities to automate switching on, changing inputs etc. so with one button you can do everything you need to be watching a DVD or watching TV.

Amazon Fire TV is all about having apps like BBC iPlayer, Plex and, ahem, Kodi.

However, until now there has been no way to get a Harmony remote to launch specific apps on the Fire TV. This is because you could not fix the order apps appear on the Fire TV’s app launcher screen . The apps appeared in order of how often they are used which changes all the time so there was no way to create a command sequence (macro) on the Harmony to navigate to a particular app and launch it.

In December 2016 my 2nd Generation Fire TV box received the big upgrade to the user interface and one of the first things I realised was that you could customise the order the apps appeared and they don’t change position. Eureka! That means it’s possible to create a sequence of remote commands to navigate to a particular app and launch it. So I set about trying it out and it really works great.

UPDATE: Following a question posted on my video I’ve made another quick video showing how to actually set the fixed order of apps on the new FireTV user interface: Scroll down to watch it here or watch it on YouTube here.

For example, with the new interface the apps row (or ‘drawer’) is always selected by pressing home then down three times and at that point the first app will always be highlighted. So a sequence of home, down, down, down, right, OK will select and launch the 2nd app on the Your Apps & Games row. Here is that sequence in the MyHarmony programme: 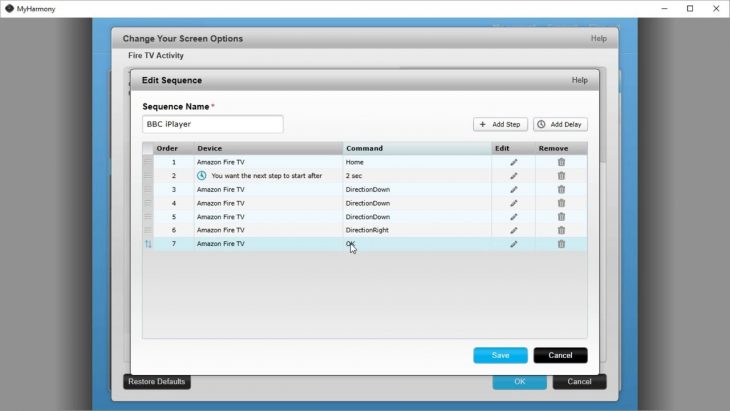 Notice the delay after pressing the home button. That is because if you are in another app it might take a second or two for the home screen to load. It’s possible that this 2 second delay might need to be increased to cater for some apps that might hog a bit more of the Fire TV’s resources or for the lower powered Fire TV stick.

Another delay for the 3rd app: As you will see in the video at the top of this post I discovered a small glitch in selecting the 3rd app on the Apps row which needed another pause added as shown here: 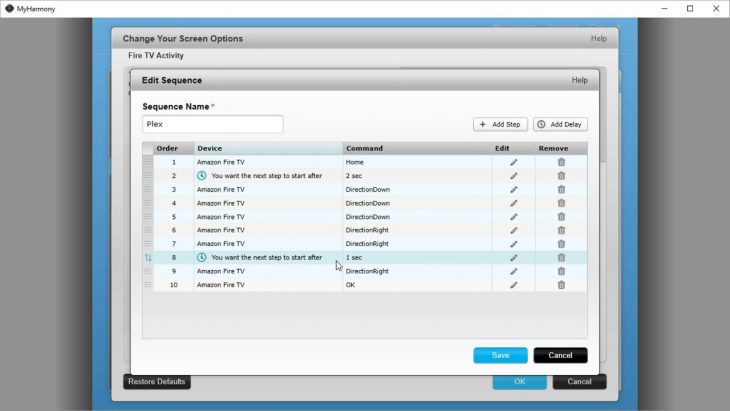 Basically, the speed at which the Harmony sends the commands is a bit too fast for the FireTV to keep up and it did not respond to the 3rd DirectionRight command but by adding a delay it worked fine and the FireTV was able to ‘catch up’. Unfortunately, unlike IR controlled devices there is no option in the MyHarmony setup app to change the inter-key delays for the Fire TV.

Watch the video at the top of this post to see how it works and how to set it up.

Here’s my followup video showing how to set the order of the apps in the new user interface:

If you found this useful, please let me know by leaving a comment below.