Super high speed 4G mobile internet has arrived in Cyprus so I decided to test out the speed. 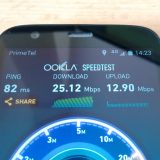 Both Primetel and MTN (Mobile network operators in Cyprus) have launched their 4G mobile networks with up to 70Mbps. As you can see above, in my test, I got a speedtest.net reading of 25.12Mbps. Primetel have posted a video on their Facebook page showing a reading of 68.57Mbps taken in the City of Limassol. My test was done near Oroklini which is outside the city limits of Larnaca so I guess it is expected that the speeds will be less in rural areas to begin with.

For comparison here are the results I got from the same phone on 3G (HSPA+) and WiFi (8Mbit ADSL): 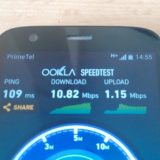 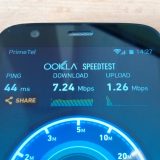 But what about the cost?

High speed mobile internet is all very well but now the operators need to address the big problem – data costs. Cyprus is one of the most expensive places in Europe for regular fixed broadband and even more so for mobile internet. These are the Primetel prices for mobile internet (in addition to the regular monthly contract):

The other operators in Cyprus (Cyta & MTN) have very similar pricing. It is possible to get bundled plans with inclusive voice, SMS and data but they all work out about the same cost for the mobile internet part.

To put this in perspective I used almost 30% of my €8 of monthly data just doing the 4G speed test above! If I were to download data at the speed I got (25Mbps) I would use my entire 250MB in just 80 seconds.

By comparison when I visit the UK I use a T-mobile (EE) Pay-as-you-go sim and I pay £5 for a months unlimited internet.

Last year Primetel were awarded the 3rd mobile phone operator licence in Cyprus. Up until now they have been piggy-backing the Cyta and MTN networks. This launch of 4G also sees the launch of Primetel as a truly independent operator. Hopefully this means they may be able to call the shots and do something about the ridiculously high prices for mobile internet in Cyprus. But I won’t hold my breath.