How an HDMI switch saved me buying a new TV

With more of our day to day electronics using HDMI instead of old fashioned analogue video, S-Video and RGB SCART connections my home entertainment wiring setup was becoming quite complex.

This is what I’ve got in my telly cabinet: 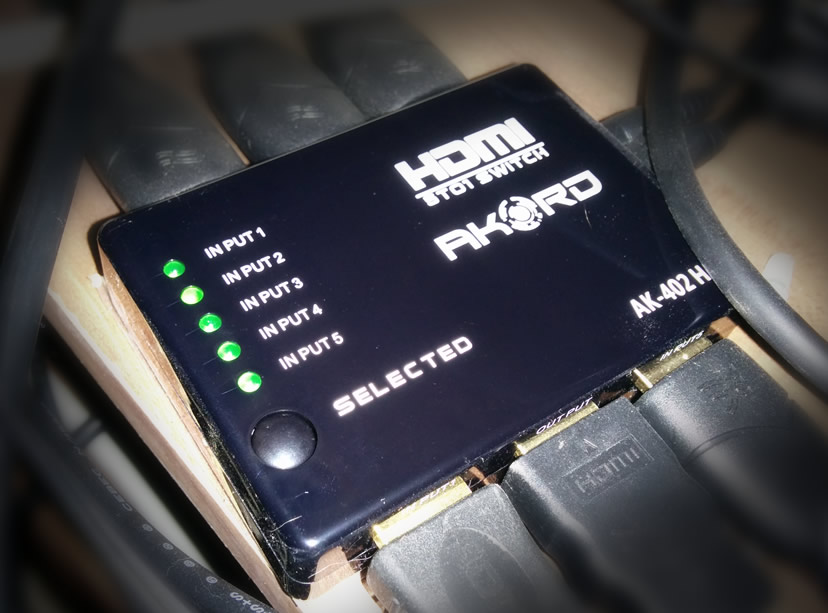 My TV (Sony KDL-40EX1) has 3 HDMI inputs but I don’t like to connect my stuff direct to the TV because of the poor sound quality – it all goes through my AV AMP which switches between all the inputs and outputs whatever is selected to the TV’s main HDMI input. The TV does have digital audio output feeding back into the AMP but it only outputs 2 channel stereo (something to do with DRM at the time the TV was made) so I don’t get 5.1 surround sound from anything connected to the TV which is then fed into the AMP.

The AV AMP has quite a lot of video inputs but only 2 HDMI inputs – which was fine when I bought it as I only had a couple of devices with HDMI but it had now got quite complicated.

I was using the first HDMI input for my satellite receiver and the other one for my XBMC PC. My XBOX One and the Sky NowTV box go into the TV HDMI 2 & 3 inputs so I only get 2 channel stereo from them through the AMP. The HDMI 1 input on the TV is connected to the HDMI output from the AMP. So that leaves me with the IPTV box – it goes into the AMP at composite video/audio level (RCA connectors), the AMP converts that and sends the picture out via HDMI to the TV – but obviously at a low composite video quality.

Oh, did I mention, I also have a Logitech Harmony universal activity based remote that does all the switching of inputs automatically for whatever activity I want such as “Watch NowTV”.

The Harmony Remote is key to what turned out to be a very in-expensive solution to my wiring headache!

Being a bit of an AV Geek I was sceptical if such a cheap remote control switch would do the job. And it had to be reliable  – when my wife presses “Watch NOWTV” on my Harmony Remote to catch up on her soaps after I’ve been playing on the XBOX it has got to work! I figured for £15 it was worth a punt.

Result! It works flawlessly. My setup is now dead simple.

A few points about the switch

It comes with it’s own little remote control which works great on it’s own if needed. Also, you can only switch to an input if there is a signal present. This is to do with the auto switching which I don’t need. The switch will automatically change inputs to whatever was the last device to be switched on and sent a signal. If you switch off the selected device the switch will change to another input that has a signal on it.

Some of the reviews on Amazon say the remote control is not very sensitive. That is not a problem for me as all my kit is hidden away in a cupboard with a Remote Extender thingy (affiliate link*) that has little emitters on cables. One emitter is stuck right on the HDMI switch’s IR receiver.