No Sound on Amazon Fire TV with Air Mouse 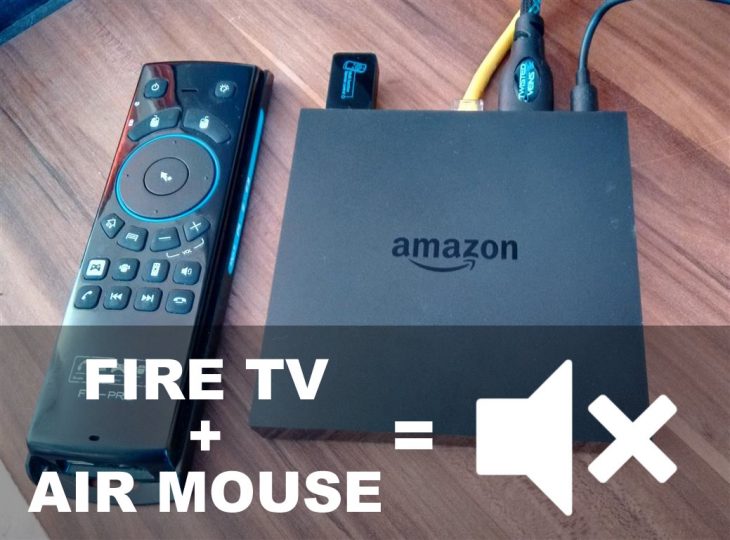 Not getting any audio from your Fire TV box? Have you got an airmouse remote control keyboard connected to it?

A wireless mini keyboard like the Mele F10 Pro Air Mouse is a great thing to have for a set top box like Fire TV or a Kodi Android box for entering text etc. so when I got my new Amazon Fire TV box I plugged in my F10 pro dongle and the keyboard worked fine during the initial set up. Later though I thought the Fire TV box (2nd generation UHD 2015 version) was faulty as I couldn’t get any sound out of it over HDMI with or without Dolby Digital Plus enabled. It wasn’t until I disconnected everything and tried on a newer TV that it started to work. Then I plugged the Mele F10 Pro USB dongle into it and the sound stopped working. It took a while but I eventually realised why this was happening.

The Mele F10 Pro Air Mouse + Keyboard has a built in headphone socket so when you connect it to a computer or set top box the audio output from your device can be sent to the air mouse. Computers and some other devices will let you switch between sending the audio to the speakers or the air mouse remote and the Mele F10 Pro does have a button on it which should do that as well. But it doesn’t work on the Amazon Fire TV, all audio is sent to the headphone socket on the air mouse.

So the good news is that my Fire TV isn’t broken but the bad news is I can’t use my Mele F10 Pro Air Mouse as a keyboard on it. Luckily my Logitech K400 wireless keyboard works perfectly with the Fire TV.

Perhaps a solution will come along but for now, don’t use a wireless keyboard/airmouse with a headphone socket on a Fire TV as you won’t get any audio over the HDMI.