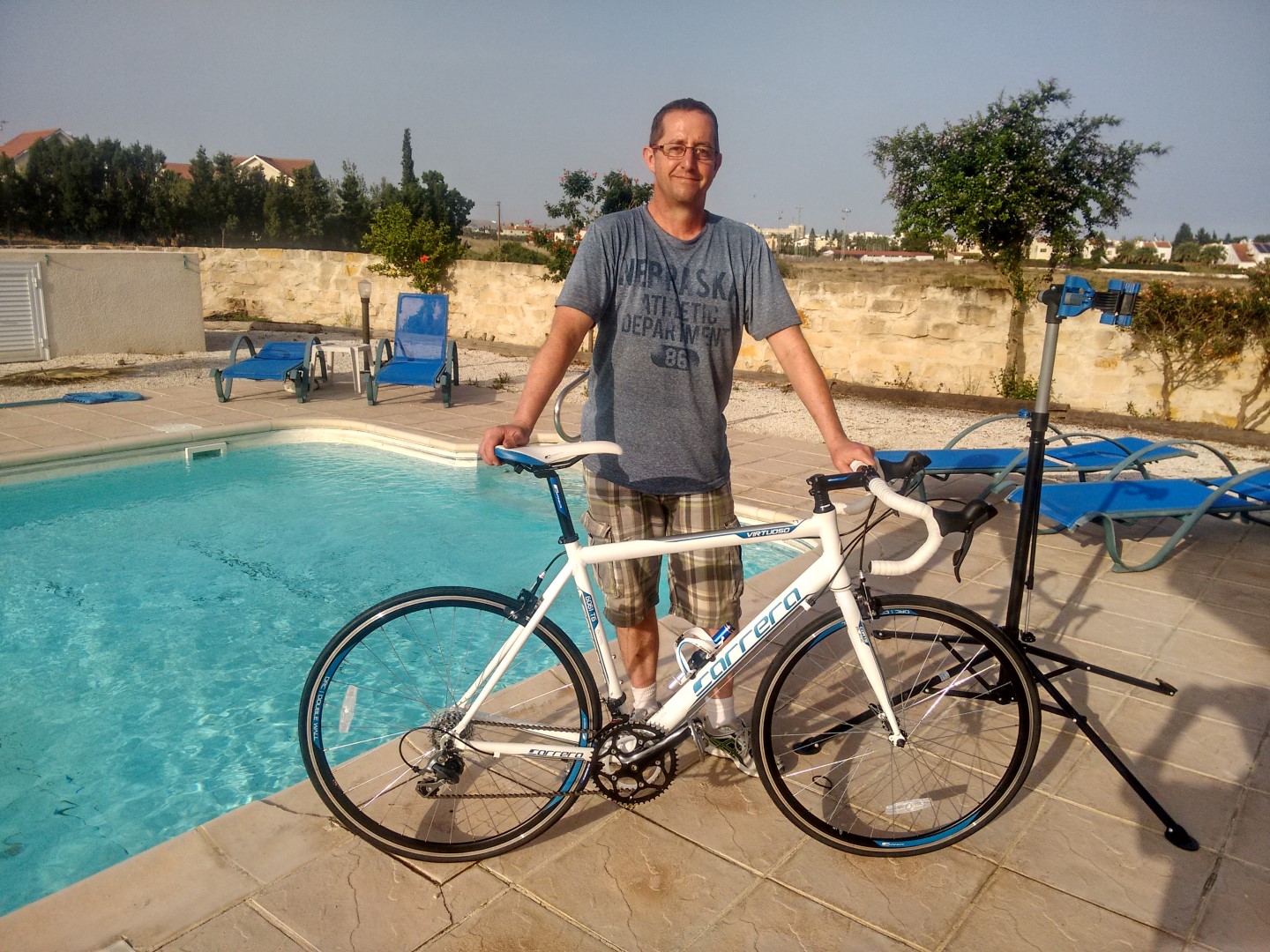 In May last year (2016) I took the plunge and bought a road bike and this is my generally positive review, which Halfords didn’t like. The review was rejected, probably because of the mention of damage to the bike, but it shows that you if you see a product on halfords.com with all positive reviews it does not mean it didn’t get any negative ones. Especially in this case as the bike just happened to be a Halfords own brand – Carrera.

Anyway, here’s the review exactly as I submitted it along with the photos I included.

As a mountain bike rider for over 15 years this is my first road bike. I live in Cyprus where they don’t believe in the concept of decent entry level price bikes (i.e. less than £500) so this was purchased in store by my parents and accompanied them on their flight to Cyprus in May 2016 in the bikes factory packaging. The guys at the Leamington branch did a great job putting up with my WhatsApp’d messages via dad in helping me choose this bike and some accessories to go with it.

I fully realised it was a risk to buy a bike like this but I had done plenty of research to determine this bike would suit my needs as a newbie road biker.

Unfortunately at some point in the transport to the Halfords store the front forks had been damaged. When my dad got the boxed bike home he noticed on the bottom of the packaging where the bottom of the forks were there was a warning that it was a very fragile area and there was a little denting in the packaging. He just put some extra padding on this area for the journey to Cyprus. When it got here the extra padding was intact suggesting the damage had occurred before. We know we should have got this checked out before it left the UK but hey-ho, that’s life.

The damage was that slot where the wheel axle goes had been bent closed and the paint chipped off. However, we fixed it by gently and very slowly bending it open and I will need to apply some paint as well. I know Halfords would have rectified this had the damage been properly inspected before the bike was flown to Cyprus.

However, apart from the above, I am absolutely THRILLED with it!

We got around 10% off the bike during a spend-and-save promotion which made it even better value. It is a perfect bike to get started with road riding and I am now hooked. I normally ride around 15 miles a day on a mountain bike on a mix of dirt tracks, downhill and tarmac. On the Virtuoso I’m clocking up closer to 20 a day on the tarmac. The ride really encourages you to push harder and I’ve now got my cadence up to a decent and mostly consistent 90rpm on the flat.

The bike looks great too and because it’s white it will encourage me to wash it more often! 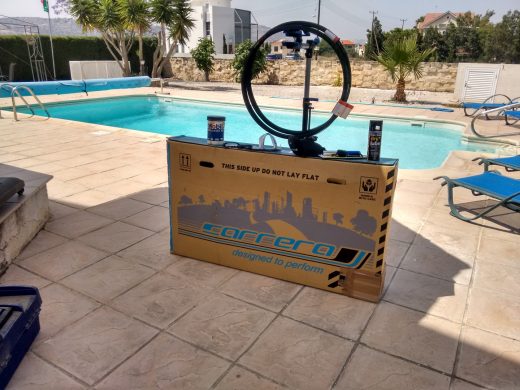 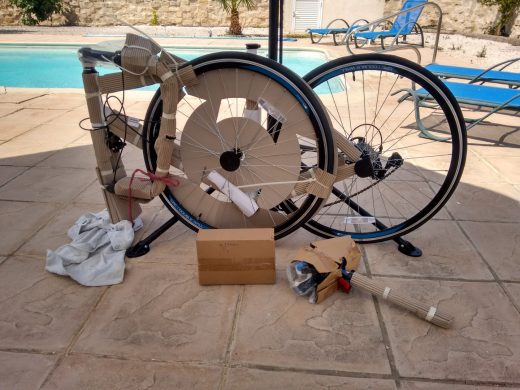 It was very easy to build out of the box (with the exception of the damaged forks) with the help of the Halfords how-to videos and the gears only needed a little tweaking after the first few rides. Most of the assembly was pretty much common sense though for someone with existing cycling experience (mountain bike etc.). I have already upgraded the tyres from the stock 700x25c to some more puncture resistant and comfortable 700x30c’s and the pedals were replaced with clipless pedals to fit my existing cycling shoes. I also installed a couple of Slime puncture resistance tubes for added protection.

Overall I am very very happy with this great introduction to road biking and suspect I might be upgrading in a year or two and will most probably visit a Halfords in person to purchase, inspect (for damage!) and then bring back to Cyprus.

Onwards… to my first century! Ride on! 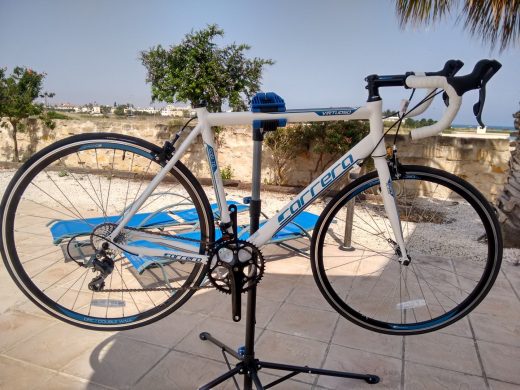 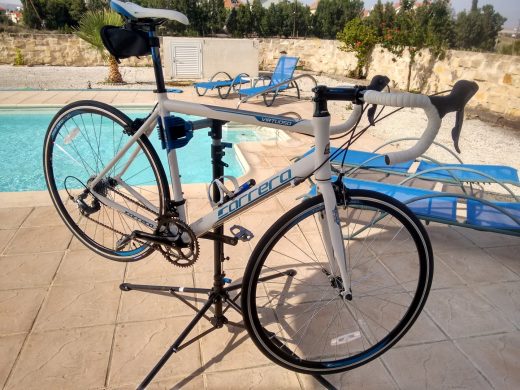 The Response from Halfords

I first received an email which read:

Thank you for taking the time to post a product review on Halfords.com. Unfortunately, we can’t post your review just yet. While we aim to share all consumer reviews, they must first meet a few guidelines. However, we encourage you to return to the site and resubmit it after reading our guidelines.

If you read the guidelines you’ll see that nothing I wrote went against their rules. I replied to them pointing this out and unfortunately I have lost their reply to that. But I do remember they said the internal logistics of Halfords cannot be discussed in reviews! They did say that they would take the information (regarding the packaging) on board and pass it onto their shipments division or something.

Earlier this year we bought another bike from Halfords while I was in the UK for a visit, a mountain bike for my Wife. It was also to be transported to Cyprus with me on my return flight. Of course I had to check inside the packaging by the bottom of the front forks and guess what… no improvement at all! Fortunately this bike had no damage to it but we put plenty of padding under the forks just in case. The bike made it to Cyprus with no problems.

So the moral of the story…. if you buy a bike with the intention of sending it on in it’s original packaging…. thoroughly check inside the packaging and add additional padding as you see fit.

Halfords have been pestering me to submit a review for the new bike, a Carrera Vulcan Womens Mountain Bike. But for some reason I am reluctant to write one for them!