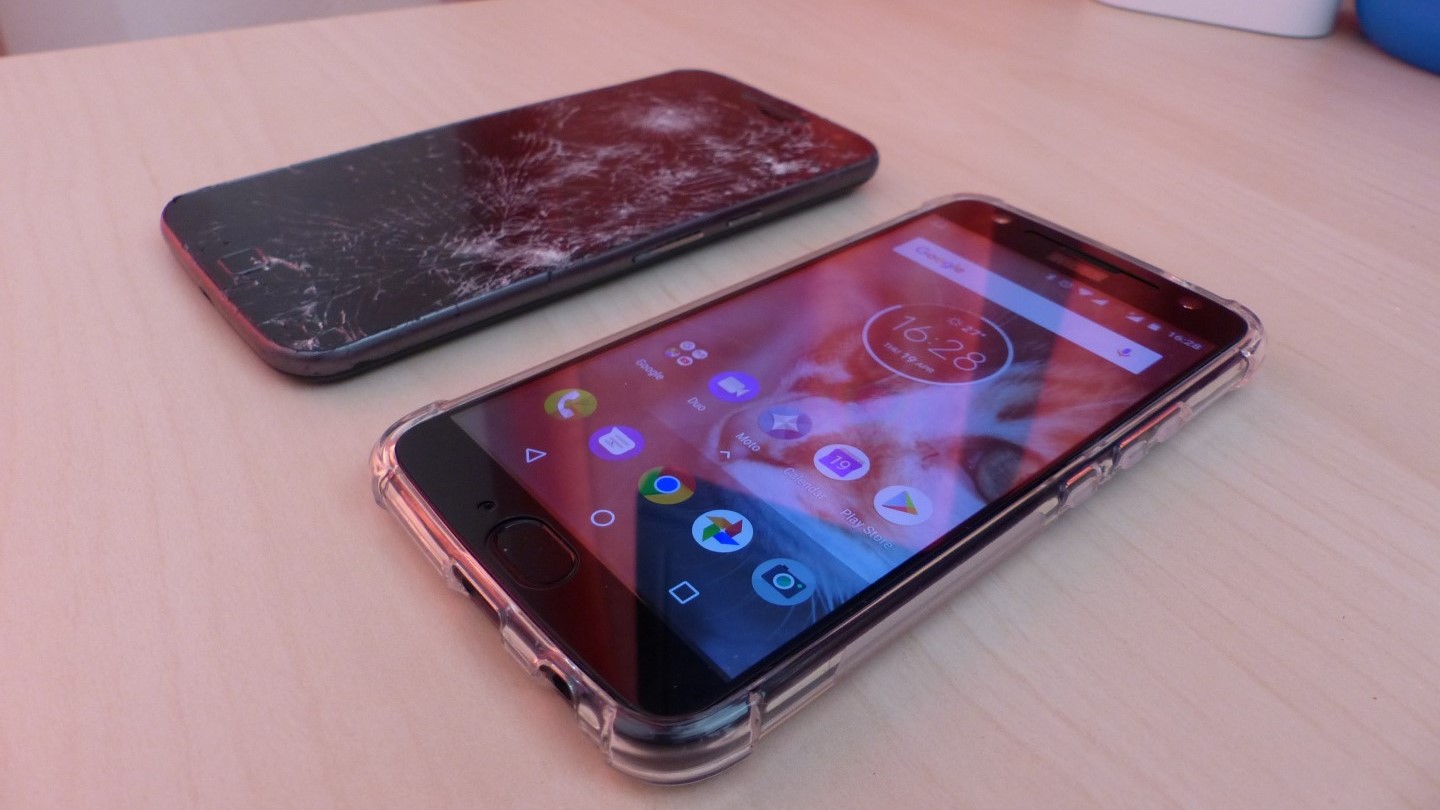 I recently bought a Motorola X4 phone and didn’t want it to succumb to the same fate as my Moto G4 Plus.A bumper case and screen protector were in order so for little more than a dozen of my Great British Pounds I was sorted.

Normally I don’t bother with screen protectors since most phones come with Gorilla Glass and Oleophobic coating so I figured that’s enough. From my experience it always has been, never had a scratch and always easy to buff up to a shine like new. Until my little G4+ experience! So although I prefer my phones au naturel I decided to go full metal jacket (well, almost) on this one.

Scroll down for some videos of the cover and tempered glass screen protector.

What happened to my G4 Plus?

It had an accident. Well, it had several accidents which ended with a high velocity fatal drop, face down, onto the ground.

If you’ve ever had a phone that suffered from ghost touches you will be able to sympathise with me. That’s when you phone appears to have a ghost tapping randomly on the screen. Some phones get it worse than others but my Moto G4+ had it bad. Really bad. When you attempt to unlock your phone and the ‘ghost’ starts entering random numbers on the pin-unlock screen it risks locking you out. Or you manage to unlock  it and then apps get opened at random or the phone starts dialling random people. Yes, it gets very frustrating and it’s easy to initiate an “accident”.

The phone was too old to return under warranty (before the final accident). From what I’ve read on the forums quite often the service centres just perform a factory reset and return the phone to you. A factory reset on my Moto G4+ helped, for about half a day, and then the ghost returned.

Before buying the X4 I searched around and couldn’t find much evidence of ghost touch problems. On the other hand, Google Moto G4 plus ghost touch and you’ll find many, many, cases of the phenomenon. None of the solutions offered around the web helped my plagued G4+ though.

Why did I buy another Motorola then?

I’ve had Moto G’s since the 1st generation XT1032 because I love the (almost) pure Android experience. I upgrade to newer models as technology moves on with faster processors and better cameras. The Moto G series  also fit my budget and allow me to upgrade every 1-2 years. I’ve never had ghost touch problems on any other Moto phone and neither has my wife who is currently running a Moto G5.

I don’t like to spend more than £250 on a new phone.  When I was able to buy the X4 for less than I paid for my Moto G4+ it was an opportunity to take a step away from the Moto G family.

The X4 shares the same nearly pure Android experience with other Motorola phones so I’m very happy with it.

What about the new Moto G6?

I was actually holding out for the new Moto G6 which is due to be launched today (19th April 2018). This was based on the premise that the G6 would come with a compass. I had already determined that after trying to navigate cities I hadn’t visited before on foot using a phone without a compass that it was an essential feature on my next phone. For some peculiar reason the Moto G4 and G5 series of phones did not have a compass so I could not be sure the G6 would have one. I was going nuts using a really old and slow spare phone so when the X4 came up for €242 on Amazon Italy last month I jumped at it.

Maybe I’ll consider the G6 in six months, after it’s been released. Assuming of course it does have a compass and there are no reports of ghost touch problems!

No, really, there’s a cute stuffed kitten in this video! It’s worth watching just for that. Actually, that’s the only reason for watching it if I’m being honest.

See how I fared applying a tempered glass screen protector. It’s OK but not as nice to touch or clean as a naked, unprotected, screen.