Check out the latest addition to my arsenal of IP Cameras with a little trick up its sleeve.

UPDATE: September 2018, the Hikam A7 now supports Amazon Echo Show (affiliate link*). Sadly I don’t have an Echo Show (yet) so I can’t test this out!

I’ve been playing around with seriously evaluating a selection of CCTV equipment lately. I found myself building a DIY Home video surveillance system while satisfying the gadget fan inside me. I started with basic 720p indoor cameras from Sricam and now Super HD hi-res cameras from WGCC and Reolink. There’s even a completely wireless battery powered camera which lives in my palm tree – the Reolink Argus 2. The latest addition to my collection is the Hikam A7.

Whilst most IP cameras can be used as standalone devices with their own storage and apps I prefer a centralised CCTV system. I have both a dedicated NVR box and a separate PC running Blue Iris software.  Some of my cameras also have SD cards installed for local storage. You don’t need all that but for me it’s a kind of hobby and lets me test and review new CCTV tech.

I’m a bit of a tech-head when it comes to IP cameras but most people are not. Most people want a security camera that’s easy to set up and does its job effectively. I can relate to that.

Hikam asked if I’d take a look at their 2nd generation A7 IP camera. They say it accomplishes two important things for the average user: Simple to setup and effective motion detection. So I took it for a spin and they definitely score points for simplicity.

Hikam call it person-detection instead of motion detection. Using magic advanced software algorithms, the camera can distinguish between real humans and things that move that are not human. Things like cats, dogs and things just blowing in the wind like trees. It’s going to be ideal for cameras which look at a garden or a hedge where there’s a good chance there will be plant life moving in the wind. Other systems deal with this by only monitoring certain areas of the view for motion. That’s OK in some cases but some people may find it can be fiddly to set up and it doesn’t stop the local cat population triggering motion detection. Hikam want your life to be more simple and activating Human Detection in the app is really easy, and it does actually works.

I did some tests over a couple of days and found it to be 100% effective at avoiding false alarms from blowing trees and bushes and also from cars passing the end of my drive where the camera was pointing. It was not so effective with distinguishing between wildlife and humans. It successfully identified all my appearances in the camera’s field of view but a few cats also triggered human-like movement. I’d say it was 90% accurate for human detection but most importantly it completely ignored the moving bushes, other plant life. There are lots of cats around my house so I was able to watch and see that most cats were correctly ignored by the camera.

Here is a video made by Hikam themselves about the advantages of their Human Motion detection system. It’s in German but it you tap the Settings gear in the Youtube video, you can activate automatic subtitles (CC – Closed Captions) and set the language to translate to English:

Go back a year or so and getting a basic IP camera setup wasn’t so simple and could be frustrating. Nowadays, with better apps, camera makers are beginning to make life easier. The Reolink Argus 2 I tested recently actually made setting up a security camera not just easy but also fun! Hikam have put simplicity high on their list and it is a breeze to setup. As you can see in the video you just need to power on the camera, register on the Hikam app, enter your wifi password and wait for the bong! The camera is then connected to your WiFi, and the internet* for remote viewing.

During the initial setup you have to complete a registration process. You have to choose a username which isn’t already being used and enter a password.  This allows the camera to connect to Hikam’s servers – that’s to enable remote access to the camera without messing around with your router. It’s very common these days for camera suppliers to use this kind of system, called p2p, for remote viewing.

Remote viewing worked fine when I tested it. You have full access to both live view and recordings from anywhere you have an internet connection. I did find that after a while the app became a little sluggish on my older 2nd Generation Motorola Moto G phone. A simple restart fixed that.

*Some more advanced users may not want, or require, that the camera connects to the internet.  The good news is that once setup, even if you block internet access to the camera in your router, the camera is still available on your home network. It does not need to be connected to the internet in order for it to work.

I must admit that the app, although branded as Hikam, bears a resemblance to other brands including Sricam. It’s more polished than Sricam and of course provides access to Hikam specific features like the Human Motion detection. I guess this is actually a good thing. If you’ve used other standalone security cameras with apps you’ll be in familiar territory with the Hikam app.

The app lets you setup things like recording quality, local (SD card) storage, motion detection and email notifications. There is also access to other information you’ll need for more advanced use like IP address and network configuration. You can have the app notify you immediately of any triggers 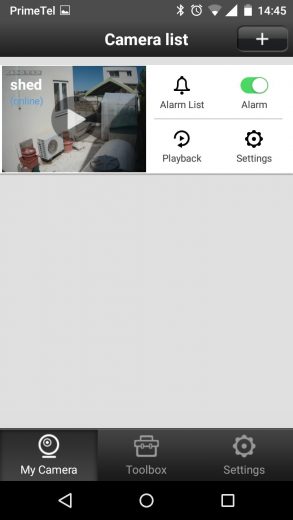 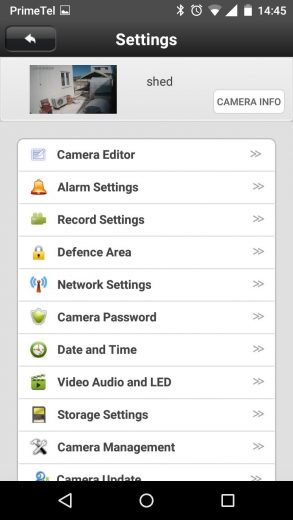 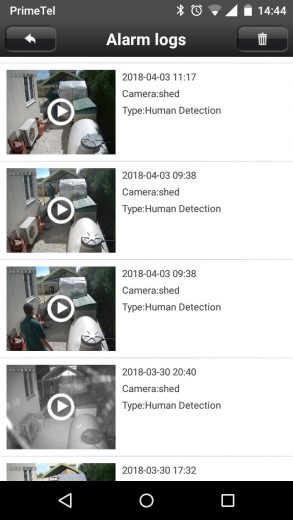 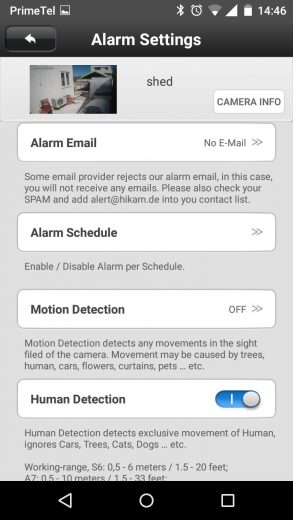 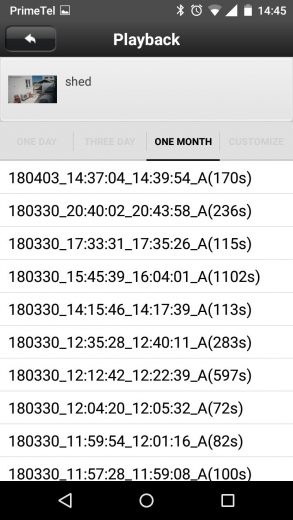 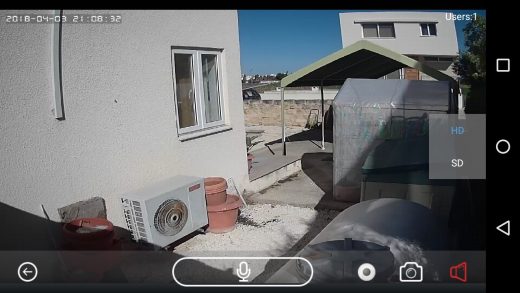 All of this is pretty standard stuff for IP cameras designed to be used as stand alone devices with remote monitoring via the app. Except of course for the Human Motion detection.

The Human Motion detection certainly helps for accurate triggering of the camera. The second thing that HiKam have up their sleeve is a separate wireless battery operated Passive Infra Red sensor like the ones you find on security floodlights. You would mount this where you want to detect movement and it will wirelessly activate the recording of the camera when someone passes. This uses a common 433MhZ frequency often used for short range wireless communication. They’ve also got a sensor for detecting when a door or window is opened which uses the same battery operated wireless technology to trigger the camera to record. 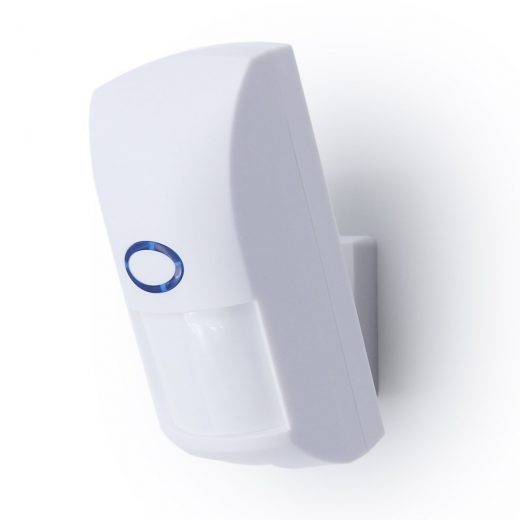 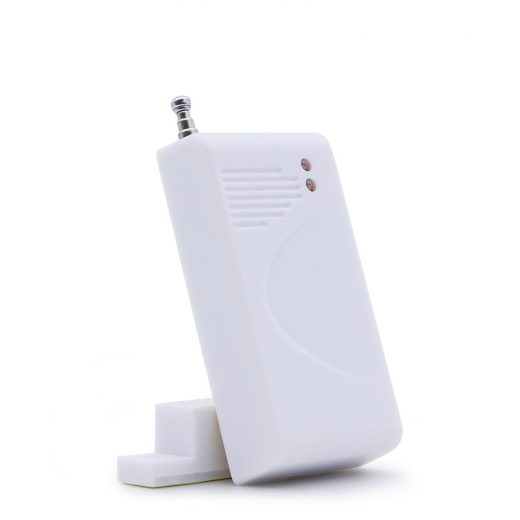 The Hikam A7 is Onvif compliant meaning that it’s video stream is available to other devices on your network like centralised CCTV systems (NVRs, Blue Iris etc.). I tested this out and it worked with both my Blue Iris system and an NVR I have. One thing to note is that by default the RTSP stream is NOT password protected. This is an option that can be turned on in the app quite easily though.

Motion detection was another thing. In my video I mentioned that the motion triggering via Onvif, which is still in beta, worked on my Blue Iris system. Well, it did to begin with but it stopped when I went to reconfigure some other settings. At the time of recording I hadn’t tried it with my NVR but I have been able to test it now. The built in motion detection features of Blue Iris worked fine but that does not benefit from the Human Motion detection of the Hikam, yet!

I hadn’t come across Hikam before. This is probably because they are most active in Germany, they are a German company after all! They have support websites in English and German with lots of info about RTSP streams, Onvif, Blue Iris etc.. Websites in Italian, French and Japanese appear to have less information, mainly user guides, but it looks like support tickets can be submitted in those languages.

During my discussions with Steven at Hikam in Germany I was discovered they are involved in the development of the software on the camera. Some other brands are often at the mercy of mass produced software provided through OEM arrangements.