Now known as the Aki 7’s Tournament the Carter Cup was a seven-a-side competition at RAF Akrotiri in Cyprus. 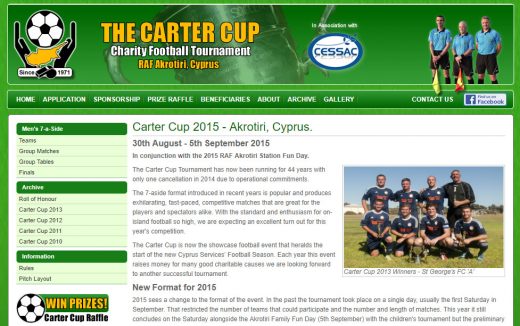 I became involved with this event in 2010 when the organisers had been let down by their previous web designers and they were delighted when I stepped in to save the day and also provide the website for free! I did this because it was a charity event and also benefited the welfare of the British Forces in Cyprus. As an ex-forces brat (dependent) I hold the British Forces in Cyprus very dear as we were stationed here when I was a child. I am also very much into football and creator of the incredible oldfootballshirts.com so the deal was simple: I would build, develop and support the Carter Cup website in return for an opportunity to participate during the event (supporting, not playing!) and some blatant promotion for oldfootballshirts.com.

The website allowed live updating of scores during the event and confirmation of standings which led to allocation of teams for the finals. All the results and fixtures were displayed on large video screens in the control tent directly from the website so participants and supporters could be kept keep up to date. The archive sections provided a complete set of results from previous years. All sections of the website were dynamic and could be edited by myself or other nominated administrators. But, by way of helping out I ended up doing most of the updating using content supplied by the organisers.

In 2014 the event was cancelled due to operational commitments and returned in 2015. The organisers of the slightly scaled down 2015 tournament switched to using Facebook to deliver results and announcements regarding the tournament. This has now continued for 2016 and 2017 at the Akrotiri 7’s Facebook page

The original website has been archived and can be viewed here: http://cartercup.improdia.com